Hey there! Later than planned for my next post but not to worry! At least I've completed a project to enter in the Chocolate Baroque Colour Challenge this month and here it is! 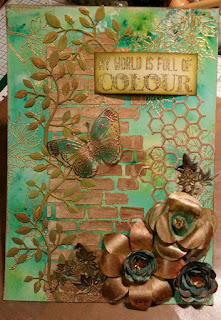 I used Brushos to make the background, stamped it with leaves from the Autumn Poppy set using Versmark and embossed them with Debbie Moore's Copper Metal Magic embossing powder. I then spread Nuvo Embellishment mousse(Cosmic Brown) through a brick stencil. and added die cut hexagons ( Tattered Lace panel die) which I also used the mousse on. Next, I die cut some sprigs(Spellbinders) from green card and used the same mousse to gild them. The butterfly is from the Chocolate Baroque Just Butterflies set. It was stamped with Versamark and embossed with the same embossing powder as above. I coloured it with Tim Holtz Distress inks (Forest Green, Crushed Olive and Peacock Feathers). The sentiment from CB Artistic Affirmations was done in the same manner!
Finally, I already had some Craftwork Cards flowers which I had made up a while ago. They weren't the right colours but I inked them with the distress inks then gilded them with the embossing mousse. As an afterthought I also added some previously cut ivy (Tattered Lace Charisma Ivy) which I also gilded! This was a colour palette which I probably would never had used as I am a pinky purple sort of girl but I have to say I am pleasantly surprised with the result!

On another subject, my kittens are now three weeks old and desperate to explore the world. It will only be a matter of days until they climb out and then the world will be their oyster! Their Mum Roxy is so good and laid back with them but the revelation is Daddy Rudi who loves them to bits and likes to groom them and watch over them! He's such a good boy! 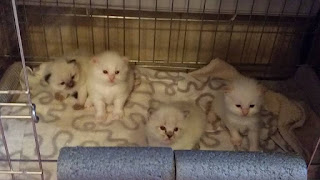 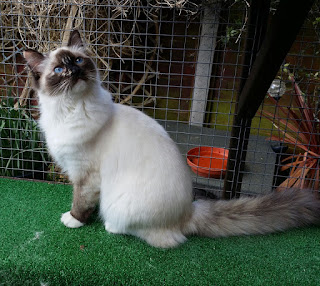 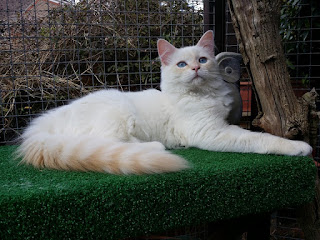 So tonight I'm going to get some time in my crafty cabin while lovely hubby watches his favourite team Man United on the tellybox! Hopefully I'll have something to show for my next  post!
Posted by Unknown at 12:01